Dogs have been doing police work and working as K-9 officers for many years. Some breeds have been revered for their hard work protecting their handlers and civilians. There are quite a few dog breeds often trained for police work that stand out as the best guardians of the innocent – sniffing out bombs, narcotics, and bringing down criminals. 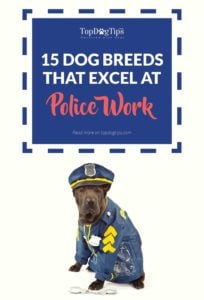 But what dog breeds make the best canines for police work? Not surprisingly, some dogs are much better for this job than others. We’ve scoured the history of police dogs to pick out fifteen best dog breeds for police work and ranked them on this list.

Did you know that dogs have been used to help law enforcement for over 100 years now? The first unofficial police dogs were employed back in 1888, and they started off with Bloodhounds based on their history as one of the best hunting dogs.

The Brits and Germans were the first nations to actively use dogs for police work.

About a decade later, when the law enforcement realized the immense help dogs provide, police have started specially training dogs to help fight crime, according to Slate. Police dog training took off in 1899, and has been growing and improving ever since.

Today, in many countries, a K-9 police dog is considered a police officer with tons of duties and responsibilities on their hands. It means these dogs must be and are treated just as a human police officer would. For example, in New York City, police dogs are most often used for tracking, detection and criminal apprehension, according to NY State Office.

Most popular dogs for police work? 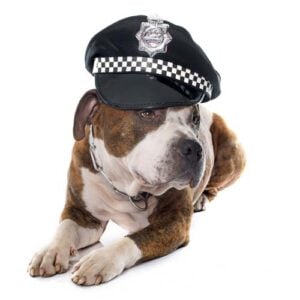 It’s no secret that German Shepherds have been the most popular police dog for many decades, and they deserve this title for a good reason. But many other dog breeds are now also trained to be a part of K-9 units.

I have compiled a list of dog breeds that have been in law enforcement service for a long time, and you’ll also find a few new faces who are changing the way we view certain dog breeds. This list is only the tip of the iceberg, as more dogs are starting to serve.

Working dogs have been protecting and serving us for many years. They have many different jobs, but certainly assisting human police officers is one of the toughest. So let’s take a look at fifteen best dog breeds for police work and what they do on a daily basis. 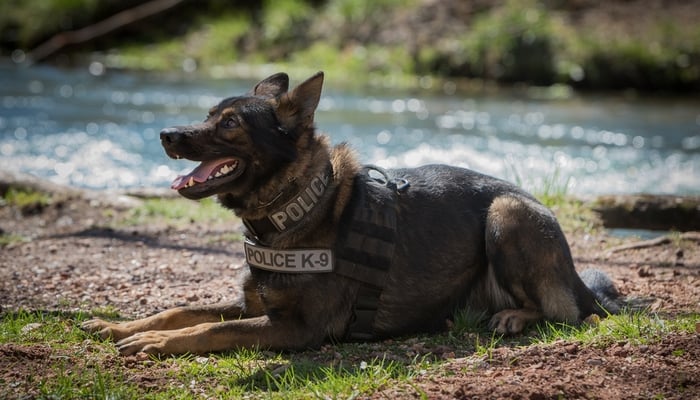 It comes as no surprise that the German Shepherd Dog is the first on this list. Most people only know them as police dogs, forgetting that they actually have a name. They are the number one breed used as K-9 officers in the world, and it’s easy to see why. 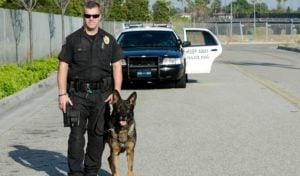 Smart, fast, fearless, and enthusiastic, GSD takes the lead by leaps and bounds. Because they’re highly trainable and follow through on commands, German Shepherds shine when it comes to bringing down suspects (armed or not).

They are amazing all-rounders who are also used to sniff out narcotics, cadavers, and also used in search and rescue missions alongside many other law enforcement units. 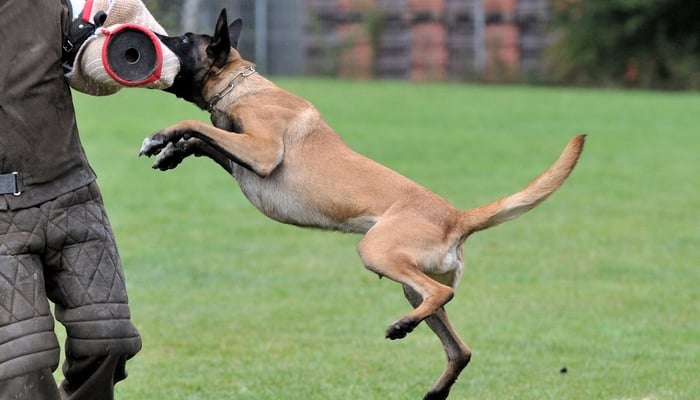 Closely related to the German Shepherd Dogs, the Belgian Malinois has also been used extensively as K-9 officers for years. With their strong protection instincts and loyal personalities, Malinois dogs are a force to be reckoned with.

This dog breed is smaller but with a quicker reaction time then the German Shepherd. The Malinois are used for almost the exact same purposes as GSD, most often to apprehend and bring down criminals.

They can also sniff out narcotics and bombs in airports. Because they aren’t normally aggressive by default, this dog breed makes amazing K-9 police officers and are a breeze to handle because of their listening and attention skills. 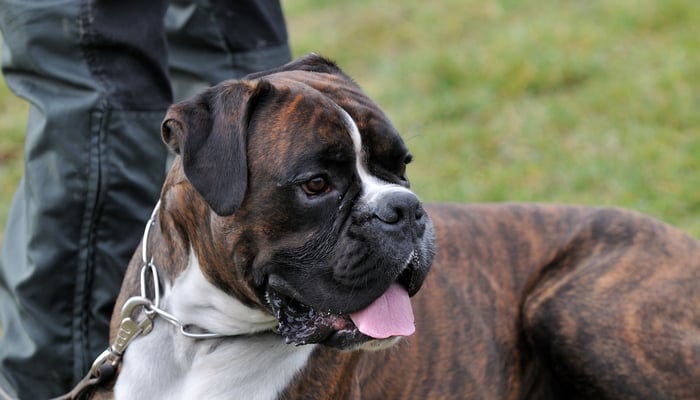 Boxers are a very flexible dog breed that has served in WW1 and WW2 as guard and patrol dogs alongside military officers. They were also used as messenger dogs to relay messages between troops in the crossfire of war.

With that being said, one of the most interesting things that Boxers did was transport communication wires with a spool that was attached to their collar. It unwound as they ran between certain points during the raging battle.

Loyal, stable and sociable, the Boxer is still commonly used as K-9 officers in their home country of Germany, but not as much in many other countries. This can be partially due to their genetic inclination towards certain illnesses in diseases. 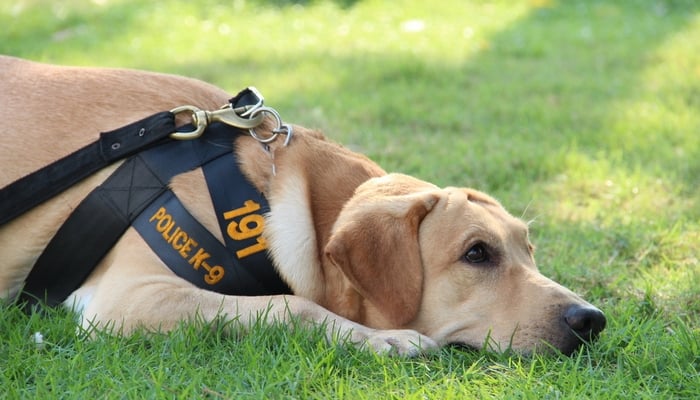 The Labrador was initially bred as a hunting gun dog to sniff out game and retrieve it. Nowadays, they are also used as bomb and narcotics detection dogs. They patrol airports and harbors with their handlers, making sure nothing fishy enters their countries.

Labs are known to be very sociable and intelligent. They have a love of learning and to interact with people. Being one of the smartest and easiest dog breeds to train, the Labrador Retriever makes an amazing K-9 officer.

The working Lab looks somewhat different than the household Lab – not in appearance, but because they’re so lean from being working dogs. Some people might think that they’re underfed, but quite the opposite is true. A working Labrador is a lean, fast moving machine whose diet is always optimized to maintain their best health. 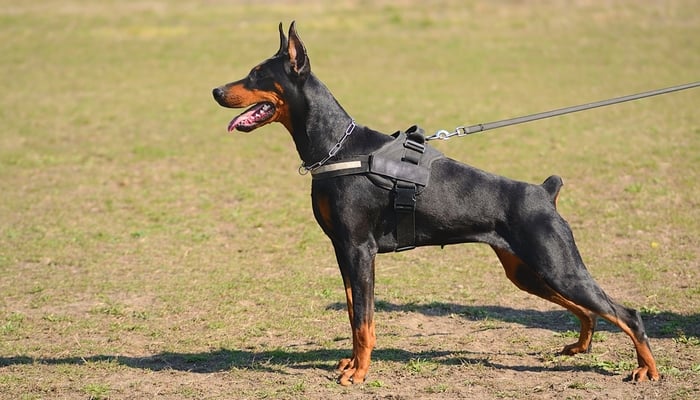 Just like GSDs, this intimidating looking breed known as Doberman has been used in the police work for many years. They’re not as commonly used as other breeds, though. They aren’t trained to be aggressive, but to rather enjoy when going out into the field to work.

Intelligent, courageous, and beautiful, the Doberman Pinscher is primarily used to apprehend fleeing criminals by grabbing the arm and pulling them to the ground. Their athletic, fast moving bodies are perfect for this type of work.

It also helps that Dobermans are naturally very lean and swift – there are very few breeds in K-9 units that could ever outrun this breed, particularly when they’re on the trail of a suspect. They are sometimes used as sniffers to detect narcotics as well. 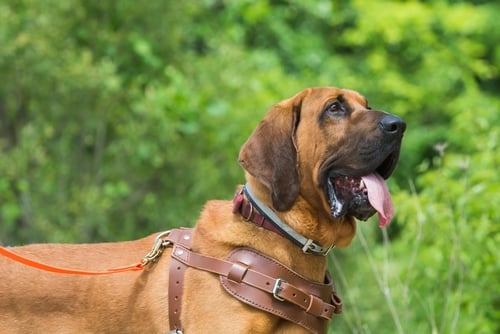 Regularly ranked in the top 10 best K-9 officers, the Bloodhound is an amazing tracker and one of the original police work dogs. Large, powerful and masculine, this dog breed can track missing persons weeks after someone has disappeared.

Bloodhounds first started their “careers” alongside humans as hunting gun dogs, and were later employed as police dogs due to their incredible sense of smell and tracking abilities. Although they aren’t that common today, they’re one of the old school police dogs, who made the work of police officers a lot easier when they needed to find criminals. 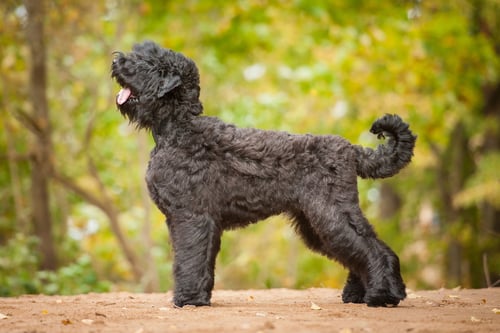 They may not look like it from certain angles, but these large dogs have been used as protection and service dogs for many decades. Bouvier des Flandres are gentle, courageous, and protective to the point of being aggressive.

There is rarely much said about this dog breed as a K-9 officer and you don’t often see them alongside police officers. However, handlers are very respectful of this breed and they dog get to work in law enforcement in certain countries.

Although they’re easy going, when wronged Bouvier des Flandres will become fierce and release a loud guttural growl that will make any clear thinking human run in the other direction. 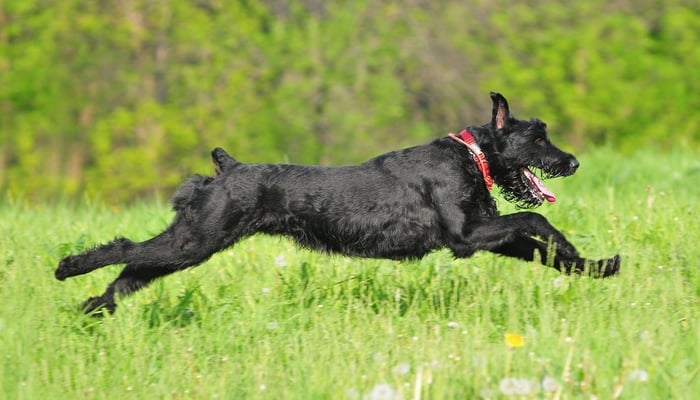 This large yet quiet dog breed who is very suspicious of strangers have been used as K-9 officers for many years as well, but they did enter the profession much later than other dog breeds.

Giant Schnauzers have a tendency to be overly aggressive, which when tapped into and siphoned into the right direction make them extraordinary trackers of suspects, missing persons, bombs, and narcotics.

The Giant Schnauzer is also used in search rescue, because of their relentlessness, loyalty to the task and unwillingness to give up. 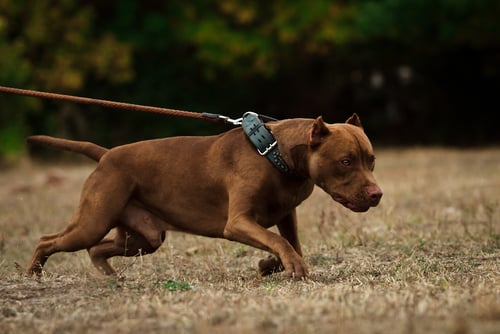 The American Pit Bull Terrier (not to be confused with American Staffordshire Terrier or Staffordshire Bull Terrier) is the newest kid on the block, as police departments have only recently started to use this dog breed for police work (in this last couple of years).

Most Pit Bulls used are rescued, which saves on costly fees from breeders as some K-9 officer dogs can cost up to $20,000. Due to their history of dog fighting, they were rarely employed for K-9 units before; however, this has been changing as law enforcement realized their great potential and more police departments are taking Pit Bulls in today.

Confident, fearless, athletic, fast and sturdy, the Pit Bull is primarily used for detection and patrolling nowadays. There are claims that the military is looking into also using this dog breed in the future as well, and now New York Police Department are also scouring animal shelters to adopt Pit Bulls, like this one employed recently. 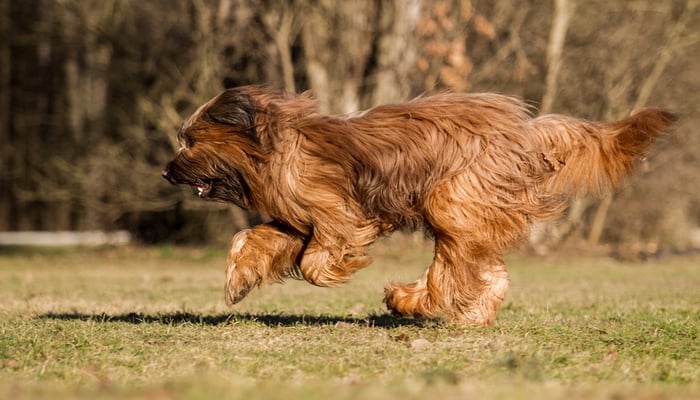 If you’ve seen this dog breed before, you won’t think that it would make a good K-9 police dog officer. However, because of their alert personalities, Briard dogs actually make excellent guard and watch dogs aimed for very specific law enforcement tasks.

This dog breed is also considered to be easily trainable, fearless and brave. Today, the Briard is most often used in police search and rescue missions, tracking, and as PTSD service dogs. This large French dog has changed the way even I see working K-9 officers. 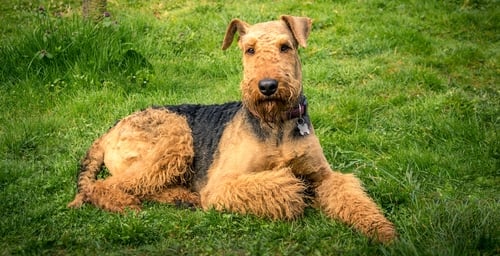 This dog breed is first known as “The King of the Terriers.” Athletic and faithful, the Airedale Terrier was used in WW1 and WW2 to protect officers. Not very much is written about the K-9 Airedale Terrier officer, but they are used primarily as patrol dogs.

The largest of all the terriers, they were originally bred to catch small animals like rats and other rodents. As patrol dogs they are able to use their excellent sense of smell to find drugs, bombs and other dangerous paraphernalia. 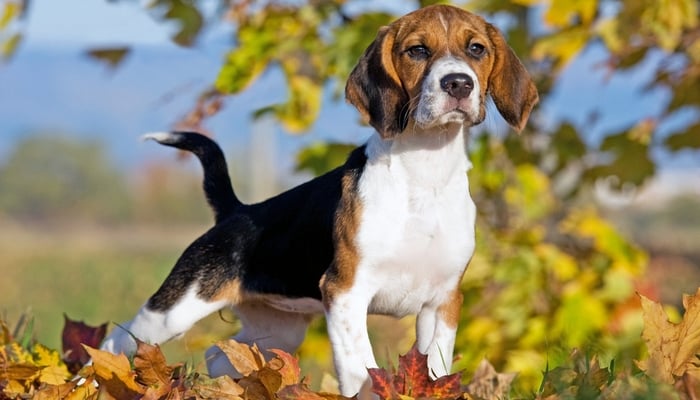 Beagles are another dog breed that first started working with humans as gun dogs. After that, this K-9 police officer is now mostly used in airports and harbors to sniff out narcotics, and any illegal substances that try to enter their countries.

Because of their size, Beagles are easy to lift into areas where a person otherwise can’t access. They can also be fast, swift and great for tracking. Beagles are also used as cadaver dogs to sniff out bodies or substances. 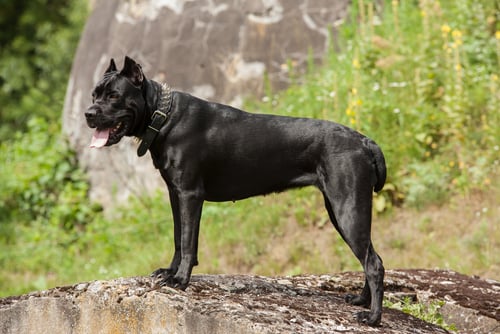 Descendant of Roman war dogs, it’s only logical that the Cane Corso should be used in the police task force. Alert, courageous, strong and very intimidating, this dog breed is a hardworking K-9 police dog who is excellent at protection and patrol work.

There is currently only one Cane Corso in service in the USA according to records. But it seems that in the future, with more Pit Bulls and similar dog breeds coming into police work, this number will rise due to their adaptability and working attitude. 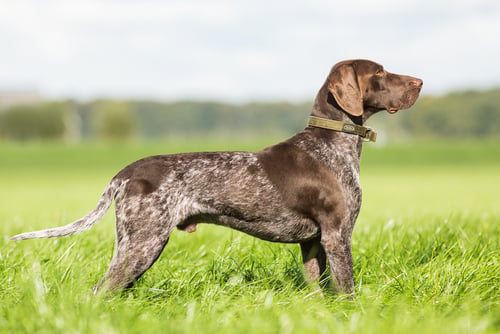 Another dog breed that has transitioned from being a hunting dog to police work is German Shorthaired Pointer. Enthusiastic, bold, and very intelligent, this easy to train breed has long since been used as tracking dogs due to their keen sense of smell.

Non-aggressiveness, sturdiness, and a strong willingness to please their owners make the German Shorthaired Pointer easy to work with, and boy do they get the job done according to many interviews from their police officer handlers. 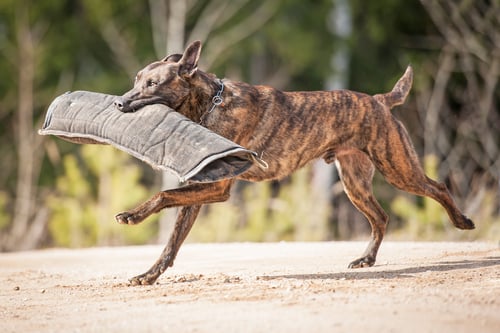 Reliable, loyal, alert, intuitive, intelligent, and non-aggressive are just a few of the traits of this dog breed. Because of their protective nature, the Dutch Shepherd make excellent patrol and detection dogs in many countries’ K-9 units.

Most often, Dutch Shepherds are used to sniff out bombs and narcotics. Also, because they are less aggressive than the German Shepherd, they are a little bit easier to handle and can work better in certain law enforcement tasks.