Asmall terrier bred for fox hunting, the Jack Russell Terrier is smart as a whip and has more energy than a toddler. This makes it no surprise that so many of these small dog’s wind up in shelters around the world. If you are considering adopting one of these feisty pups, read on to ensure that you’re not getting in over your head.

Whether you’ve settled on the Jack Russell Terrier or you’re just doing some research before adopting a new canine companion, you need to be sure that you’re choosing a dog that will fit in with your lifestyle. For example, the Jack Russell has a lot of energy. If you’re hoping for a companion that will sit with you on the couch all afternoon, this wouldn’t be a good choice for you. 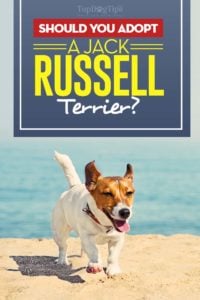 You also need to consider your space restrictions. You may be assuming that the Jack Russell Terrier will be a great fit for your small apartment. While that may be true, what about your outside environment? A Jack Russell needs lots of room to run and play, and chances are you don’t have a large yard if you’re living in an apartment.

The bottom line is that you need to research any breed that you are considering adopting. This includes researching mixed breeds, if you know which breeds make them up. It’s the only way that you can ensure that you’re choosing a breed that will fit in with your family’s lifestyle.

Should You Adopt a Jack Russell Terrier? 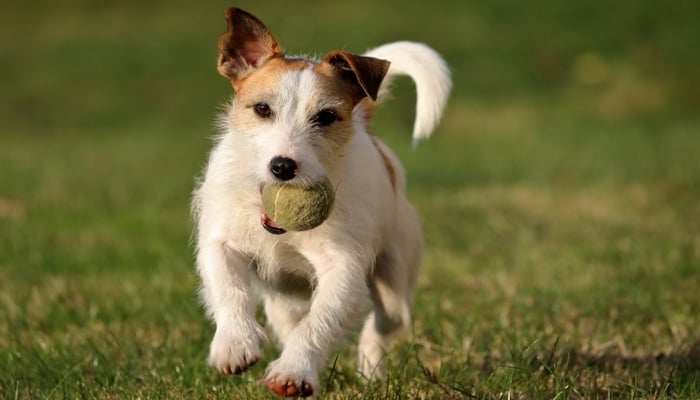 The Basics of the Jack Russell Terrier

The Jack Russell terrier was bred for speed, prey drive, and hardiness. These small dogs range from 10” to 15” tall and weigh between 13 to 17 pounds. This size makes them ideal for someone looking for a small but active dog.

The regular JRT coat is short and flat making grooming a breeze requiring brushing with a bristle brush once or twice a week. The wirehaired Jack Russell Terrier requires a little more care, as burrs tend to stick in the longer hair. Brushing with a wire slicker brush a few times a week will help to prevent this.

The slender physique of this breed (developed to allow them to chase foxes, rabbits, and rats from their holes), makes them easy to pick up and out of trouble…something these Terriers find frequently. The slender build of this terrier can sometimes pose a problem, however, when a stubborn JRT finds a hole in the garden and catches the scent of a bunny.

Jack Russell dogs are high energy and are very intelligent.

They love to dig and can be very headstrong. They aren’t easily confined and will almost always find a way under or over a fence if left to their own devices. This can be attributed to the breed’s inbred desire to hunt and a keen sense of smell.

If exercised sufficiently and given undivided attention, the JRT can prove to be a devoted companion and quite the entertainer. Because they require a lot of time and attention, these dogs may not be the best choice for first time pet owners. However, if you’re willing to do your research, even the most inexperienced pet parent will be able to provide a safe and loving home for one of these active little pups. 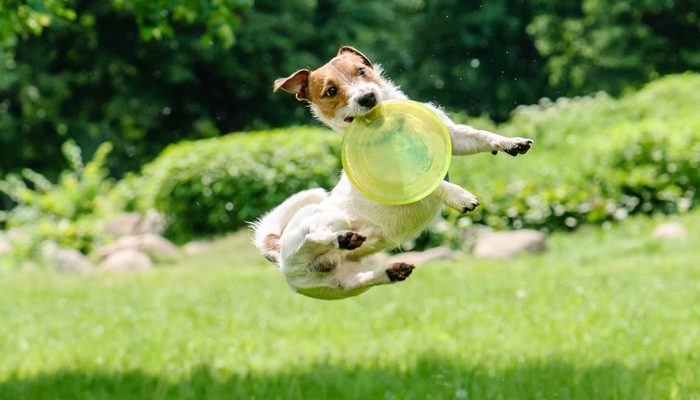 The Jack Russell Terrier does not do well with a novice owner and requires confident handling. This is due to their stubborn personality as well as their tendency to test limits. Like most intelligent breeds, the JRT will push boundaries just because he can.

He is able to detect even a hint of uncertainty and is intelligent enough to use it to his advantage. For example, if you tell him to sit and he refuses but you give him a treat anyway, he will repeat this behavior because it’s less work and more reward for him.

When harnessed with advanced obedience classes, however, the intelligence and determination of this terrier can be exceptionally gratifying. It’s no coincidence that the Jack Russell is one of the most frequently hired breeds in Hollywood! 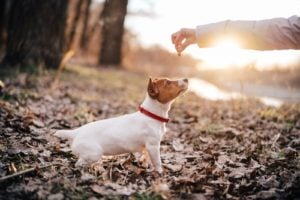 nlike some energetic breeds that will calm down once indoors, the Jack Russell is high energy no matter where he is. He will frequently jump, bounce and tear around the house and is generally not well suited to apartment life.

Add in his frequent vocalizations and the JRT is every apartment owners worst nightmare. Given farmland or plenty of exercise and stimulation, however, this little devil turns in to an angel.

The Jack Russell is best suited to being an only dog and tends to exhibit aggression and territorial behavior with canine companionship. Whether faced with a large or small dog, the JRT will find a way to get the upper hand and frequently becomes a bully.

Unfortunately, he cannot be trusted with any small pets like mice, gerbils and hamsters. They aren’t the best breed to adopt if you already own a cat. One sight of anything that resembles prey, and this pup is locked on and in hunting mode and your small pet is a goner.

The ideal home for this larger than life breed would be an active one where someone is at home during the day. Failing this, someone with the strict discipline to walk this energetic pup multiple times daily would suffice. Although they thrive most with large areas of land to run, regular walking, hiking and other activities can keep them happy so long as exercise is consistent.

The Jack Russell Terrier is not the most adaptable of breeds, he does not adjust well to apartment life and is commonly known as the “annoying dog next door” due to barking. He will hold a grudge if left alone and is particularly sensitive to tone of voice and punishment, both of which can provoke retaliatory behavior. For example, reprimand this feisty dog and you may find that he avoids you for the rest of the day or tears up your favorite hat.

Moving homes with a Jack Russell can be troublesome and, as noted above, they aren’t afraid to let you know when they are unhappy with a change. While structure is important to any dog, a structure that is too rigid can cause problems for this obstinate terrier.

The key to an adaptable Jack Russell Terrier is to socialize them well during puppyhood and expose them to a wide variety of stimuli. When done properly, this can avoid the “spoiled child syndrome” that many JRT owners experience. 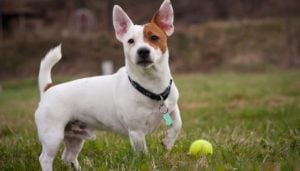 Exercise is crucial for this small dog. Not only does exercise keep him from becoming obese, but it keeps him mentally stimulated. Most often a JRT with “attitude” is the result of a lack of exercise. This sedentary life then leads to boredom which becomes a nightmare for their owner.

For example, as a child, my next-door neighbor had a Jack Russell Terrier. She had owned the breed all her life, but in her older age, she was unable to provide Flapjack with the exercise he needed. Out of boredom and a need for an energy outlet, Flapjack began obsessively jumping.

All day and all night, he would jump up and down, his head popping up over the fence around her garden. Flapjack became an obsessive dog, hungry for attention and desperate for exercise. He would later channel that energy in to digging under the fence and escaping.

It isn’t uncommon for Jack Russell’s to dig under fences or “bounce” like Flapjack did when they aren’t given enough exercise. They simply aren’t bred to be dogs that wait or lay down, they were bred to run, chase prey and have a high stamina. 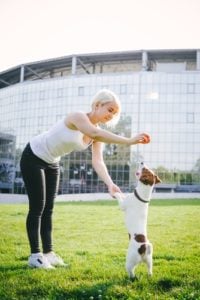 Despite being intelligent, training this stubborn dog is not always easy. While the Jack Russell has a high capacity for understanding, without the right motivation he is reluctant to “perform”. A confident handler is also a must for this dog. If he sees any way to take control of a situation or turn the tables, he will.

Many JRT handlers adopt this breed for their incredible intelligence.  These little Brainiac’s can be taught even the most advanced commands and they have the confidence to show them off.

The Jack Russell is a fast learner, but keeping his interest during training is key. Without continuous positive reinforcement, he will quickly lose interest and find a more interesting way to entertain himself. This frequently ends up with dead squirrels, holes in the yard and escaped JRT’s.

Although food can be appealing motivation for some dogs, motivating this spirited pup to obey commands is best done with activity. For example, where a Labrador can be tempted to perform commands with food, a Jack Russell is faster to respond to a thrown ball, a game of tug, or a “find it” exercise in return for a job well done. Find the right motivation and this terrier is quick to catch on, fast to act, and incredibly attentive.

How Healthy is the Jack Russell Terrier?

Terriers are known for being “hardy” dogs and they seldom become ill, but their small size and short coat length make them susceptible to cold temperatures. This can be remedied with a wind and rainproof jacket during the winter months and insulating clothing during cooler days.

The JRT is not always healthy, however. Like all purebred dogs when inbreeding or breeding for profit happens the JRT has a tendency towards certain genetic problems. These include:

These diseases can generally be avoided by researching a breeder prior to purchasing a dog. A reputable breeder will provide proof of clearances for both parent dogs as well as grading. Grading will tell you whether the parent dogs passed their health clearances minimally or without question.

If you plan on adopting a JRT and are unsure of the dog’s background, a thorough veterinary exam can identify these problems in adult dogs. Some of the above conditions can be identified in young puppies with a vet exam as well, but not all of them.

Who is the Jack Russell Terrier Best Suited For? 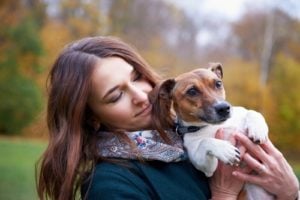 The Jack Russell is not your average small dog with bursts of energy and periods of calm. This is a high-strung dog that needs attention and regular moderate to high levels of exercise to be happy.

This makes the Jack Russell Terrier the perfect candidate for the work-at-home family who enjoy trips to the park as well as part-time workers who enjoy physical activity. Eager to learn, the JRT is perfect for the owner who intends to pursue advanced obedience classes or even take part in agility classes.

The Jack Russell is not a dog for the sedentary person. Skipping just one walk will drive this pup bananas and wind up in torn wallpaper, chewed drywall, and problem barking. This is also not the dog for you if you frequently travel, want more than one dog in the house, have other small pets, or are looking for a “simple” companion.

The Jack Russell tends to be too much for elderly owners and does not do well with small children due to regular handling. This independent breed would much rather be with an active companion who enjoys time in the woods!

Pros and Cons of Adopting a Jack Russell Terrier

If the Jack Russell sounds like too much of a handful for you, consider adopting an adult or senior pup. You will rarely find a couch potato of a Jack Russell, but they certainly slow down in their old age and become more manageable. Not to mention that there are many older and senior homeless dogs looking for homes in shelters across the nation!