They are one of natures hardest working species. Working as a unit, bees will form hives, forage for nectar and build vast reserves of honey all for the betterment of their colony and to ensure that their queen stays safe, secure, healthy and fit to produce the next generation. Did you know the best bee products for dogs can aid in your canine’s overall health and well-being. 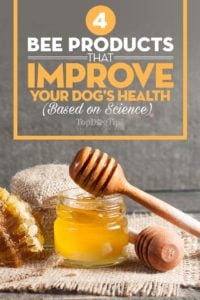 Humans have seen bees as a resource for well over 8,000 years (Pager, 1976) and by default, man’s best friend has been interacting with them as well. There are commonalities that humans and dogs share in their interactions with bees. The most obvious, of course, is through the lens of food.

From honey to beeswax, the best bee products for dogs can have some great health benefits for our canine companions. In some cases, these products can be given to your dog orally. Other times they may be used as a topical product, such as shampoos, conditioners and other grooming products. 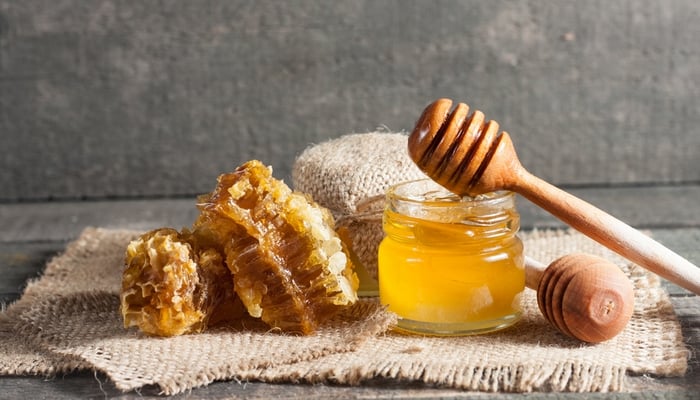 Bees may fly for miles to get to the flowers or plants that they need. They are after the nectar which they siphon out of the flower and take with them to their hive. The bee will then regurgitate the honey into a cell like structure and cover with a waxy substance. As the liquid nectar sets and hardens it becomes the unprocessed version of the sweet, delicious and golden lava we know as honey.

Generally speaking, there are two uses for honey as one of the best bee products for dogs – as a topical and as an ingestible. Topical application of honey is the more common use of honey on dogs. Sidr honey from Yemen has been shown to be as effective as decontaminating wounds as iodine (Hananeh et al. 2015).

While prolonged use of Sidr honey has been shown to heal wounds through and through. The same goes for the likes of honey from West Azerbaijan, which has displayed equally potent healing effects (Esfahani et al. 2012). Used as a topical honey has proven to be an effective and natural alternative to medication and pharmaceuticals when treating dog wounds. 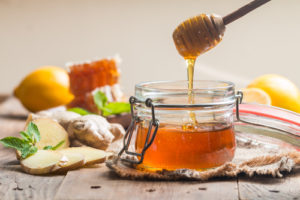 As an ingestible, honey is used as a natural sweetener and binder in dog food, both commercially and personally prepared. While its use as an ingredient in dog food is the more common way it is used as an ingestible, it is the compound known as kynurenic acid (KYNA) in honey which makes it very intriguing to many researchers, scientists, veterinarians and dog lovers.

KYNA has been observed to act as both anticonvulsant and antiexcitotoxic. It has been shown to be effective in the treatment of neurobiological disorders (Urbanska et al. 2014). Surprisingly, honey contains a ridiculous amount of KYNA and as a result is considered to have very high neuroprotective properties.

Bolstered by the efficacy that KYNA shows in treating brain disorders, researchers began pushing the boundaries of their understanding of KYNA. They decided to see if it had any effects on the dogs digestive tract and were pleasantly surprised at the results.

When given to dogs with colon obstructions, KYNA displaced a protective anti-inflammatory effect through the inhibition of hypermotility (abnormal movement of the intestinal tract) and xanthine oxidase activity (Kaszaki et al. 2008). The latter is incredibly important as xanthine oxidase is a destructive superoxide (along the same lines as cancer causing free radicals) and KYNA prevents its release and spread.

Now attributed with anti-inflammatory properties, KYNA is being looked at as a viable alternative to aid in the reduction of inflammation often associated with injury and infection. All this from a humble molecule found deep within one of the best bee products for dogs.

A word of caution on treating your dog with honey as an ingestible. Remember that honey is sweet and that’s because it is comprised mainly of sugar. Giving your dog large quantities will lead to excess weight gain and a host of metabolic complications, including the development of diabetes or other such diseases. Use it wisely, sparingly and in moderation.

When bees land on flowers and plants to forage for nectar, the pollen from these plants will undoubtedly become entangled on the hairs, wings, legs and almost every part of the bee. The bee will then spread that pollen while hopping from one plant to another on its way back to the hive. 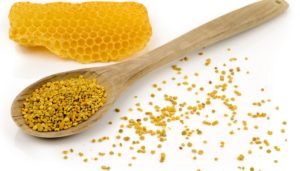 This symbiotic relationship between plant and bee provides bees with the nectar they need to make honey, but they also help the plants procreate by effectively spreading their “seed”. However, not all pollen is shed from a bee while in transit back to the colony. Indeed, a bee may still be covered in pollen when it arrives to regurgitate the nectar.

“Bee pollen” can be collected, used, and has become one of the best bee products for dogs. Containing vitamins, minerals, carbohydrates, lipids and protein, bee pollen is a nutrient dense supplement that can be found in a growing number of stores (Kroyer et al. 2001).

On top of this bee pollen is seen as an effective and natural source of polyphenols and a powerful antioxidant as it contains radical scrubbing properties, that helps keep the cancer away (Saric et al. 2009). Spurned by this, researchers began to look intensely into the phenol side of bee pollen and found that it can contain up to seven different phenolic compounds (depending on the geographic location of its harvest).

This combined with bee pollens nutrient profile gives it a high health protective potential to dogs.

While this all sounds great and promising, it good to keep in mind that bee pollen in and of itself cannot replace dog food. Rather it should be used as a dietary supplement (to be taken in addition) to regular dog food (Larkin, 1984). Also keep in mind that there are humans and dogs which exhibit a sensitivity or allergy to pollen in general.

Bee pollen, while harvested from the bodies of bees, still originate from plants and this may pose a problem, maybe even fatal, to some individuals. Be vigilant and watch out for signs of an allergic reaction. Start with a small dose and if you notice a reaction, stop dosing immediately and seek veterinary attention.

Synonymous with hippies, do-it-yourselfers, farmer’s markets and elementary art projects, beeswax has been used by humans for hundreds of years mainly to light homes in the form of candles. In the hive, beeswax is used to seal honey in the combs and to protect larvae. It’s also one of the best bee products for dogs! 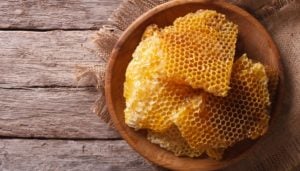 Raw beeswax is mostly indigestible in the guts of dogs due to the wax monoesters it contains (the same rings true for humans). However, beeswax does contain a certain compound that has made the research and scientific community take a pause and look at it a bit more closely.

Policosanol (PC), as the -ol at the end of its name suggests, is an alcohol. To be exact it is an aliphatic primary alcohol that has found its way in many of today’s commercially available dietary supplements and much of it comes from honey (Irmak et al. 2006).

While it is usually obtained from sources with high sugar content (honey, sugar cane, wheat), it is valued for its ability to improve the circulation system through its action in the liver to help breakdown LDL (low density lipoproteins, also known as “bad cholesterol”).

Health and nutrition experts look highly at policosanol not only because it is a safe and effective way to decrease cholesterol, but also due to its persistence (Mesa et al. 1994). Unlike other chemicals that also have the ability to decrease cholesterol, policosanol was consistent in its ability and did not display a great deal in variability of effectivity throughout the duration of the study.

Perhaps the least known of the best bee products for dogs on this list, propolis is also known by its other name, bee glue. This sticky resin-like mixture is the result of mixing bee saliva with bees wax. This viscous substance is used to seal fine gaps in the hive. 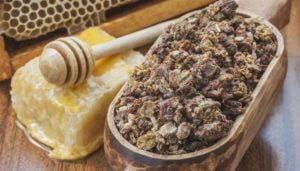 While it may be almost sap like in quality when in room temperature or higher, it becomes more fragile, brittle even, when in cooler temperatures. A glue made of bee spit and beeswax may not sound like the most healthy thing in the world, the opposite is actually true, it is very healthy and good for dogs.

Propolis first caught the attention of the mainstream when news of its antimicrobial properties got out. It was shown to be effective in fighting two known pathogens from the “Staph” family; Staphylococcus aureus and Staphylococcus intermedius (Cardoso et al. 2010). When you hear people being infected with “Staph” it is usually one of these two that are to blame, so finding a natural substance that so elegantly handles these pathogens was a big deal to the scientific community.

In dogs, propolis proved is seen as an effective means to deal with canine otitis externa (Lozina et al. 2010).  The infectious ear disease is in part due to and exacerbated by the activity of a host of microorganisms which includes Staphylococcus aureus, Staphylococcus intermedius, Escherichia coli, Streptococcus spp. and Malassezia pachydermatis. The interesting thing is that propolis is not a new and revolutionary finding.

Encouraged by the findings in experimenting with its antimicrobial properties, researchers are making headway regarding its anti-inflammatory, anti-carcinogenic, and anti-mutagenic properties as well as its effects on the immune and lymphatic systems (Sforcin, 2007).

Evidence exists which records its use throughout centuries past. Today its properties and use are still being explored and new developments are unfolding with each passing year.  Now, it is no longer seen as a one-trick antimicrobial pony, and maybe you can find a way to use bee products with your dogs. Does your dog like the taste of honey?