Chocolate has long been associated with desserts and decadence and is often viewed as an indulgence in most countries. This sweet treat can be eaten in its raw form or included in a variety of other foods such as cookies, cakes, muffins, and ice creams. But can dogs eat chocolate ever, and if not, why is chocolate bad for dogs?

If you’ve been wondering, “can I give my dog chocolate,” the answer is NO – dogs can never have chocolate because one of its compounds, theobromine, is extremely toxic to canines. Even a little bit of chocolate can cause serious health problems.

In this article, we’ll discuss chocolate in more detail, can dogs eat chocolate on occasions, and if not then why is chocolate bad for dogs exactly, and what to do it a dog ate chocolate.

Chocolate is a sweet food created from Theobroma cacao seeds that have been roasted and ground. These seeds have been harvested for centuries, but in more modern forms, they are made in block, liquid, or mold forms. Additionally, these seeds are also used as a flavoring device in other foods. 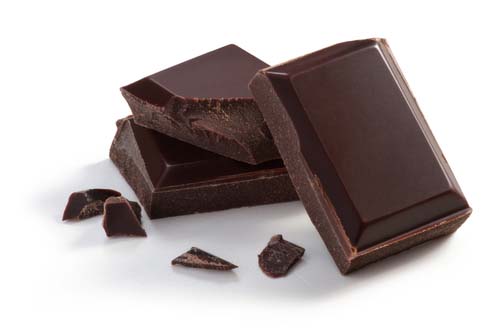 It is one of the most popular flavors and food types in the world. Chocolate can be found in many food products, from desserts to cakes to candies and even hot and cold beverages. But can dogs eat chocolate and if not, then why is chocolate bad for dogs? 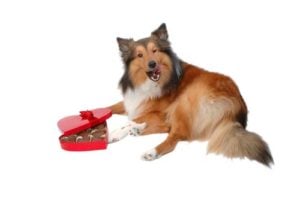 So, can dogs eat chocolate in some small amounts? No, dogs should never consume chocolate no matter how little the amount is.

But why is chocolate bad for dogs? The reason chocolate is toxic to dogs is because it contains theobromine, a xanthine compound related to caffeine that is toxic to dogs. Dark chocolates are even more dangerous for dogs to consume because this type of chocolate is much higher in theobromines. Theoretically, chocolate would be very beneficial for dogs’ health as it is for humans if we could find a way to remove the toxic compound.

Studies have shown that in humans, dark chocolate can do the following:

Dark chocolate in particular has a ton of health benefits it can offer to people, and those have been proven in a multitude of studies. But can dogs eat chocolate in some certain amount or avoid the toxic ingredient to reap the benefits, and if not, why is chocolate bad for dogs and what exactly happens when your dog ate chocolate?

Science behind the sweet poison for dogs 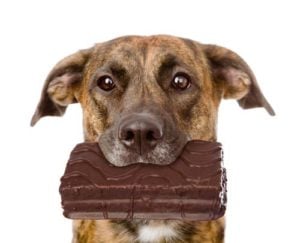 Dogs love the sweet taste of chocolate, and would gladly consume it. However, chocolate has long been known as poisonous for dogs, and is often the number one treat on the veterinarians’ radar. Its side effects on dogs have been studied for decades and we know exactly why is chocolate bad for dogs (Finlay 2005).

The main threat that chocolate poses to dogs is the amount of chocolate – and thereby theobromine – that they ingest. A small amount of chocolate, such as an M&M or two, might not be toxic to a large breed dog (although still not recommended), but may be enough to threaten the life of a Chihuahua.

Caffeine is another stimulant chemical found in chocolate that’s dangerous to dogs, but nowhere near as toxic as theobromine on a gram per gram basis.

So does chocolate kill dogs?

Yes. In studies on dogs and chocolate, it’s been observed that ingestion of this sweet treat causes mild symptoms like diarrhea, vomiting and dehydration, and often progresses into severe problems like seizures, muscle tremors and death (Stidworthy et al. 1997). The severity of the effects will depend how much chocolate and what type was consumed.

The darker the chocolate, the more toxic it is for dogs.

Studies show that really dark, unsweetened chocolate is the most dangerous type of dogs to consume (Sutton 1981). Cocoa powder and anything related that contains cocoa and thereby theobromine will be just as toxic to dogs, that may result in death.

How much chocolate is dangerous to dogs?

According to studies and Merck Veterinary Manual, the dog will start feeling the side effects of chocolate after ingesting as little as 44mg per one pound of body weight. That’s basically crumbs of chocolate. For an averaged sized medium dog that weighs about 45 lbs, a dose of 1 oz of chocolate will be enough to cause toxicity.

There are NO benefits of chocolate for dogs.

But can dogs eat chocolate in some shape or form to get the benefits? Unfortunately, no. The toxicity within chocolate renders any small benefits for dogs inconsequential in the face of the discomfort and illness your dog will experience if he ingests this food. There’s also a potential risk of heart attacks, internal bleeding and eventually death.

Therefore, any benefits of chocolate are rendered null.

Dogs metabolize theobromine slowly, so the toxic effects of chocolate may begin to appear within two hours of ingestion or up to 24 hours afterward, as indicated in the Finlay 2005 study.

There is no specific treatment for chocolate poisoning. However, common methods used when a dog ate chocolate include induction of vomiting, use of activated charcoal, intravenous fluids, and oxygen. 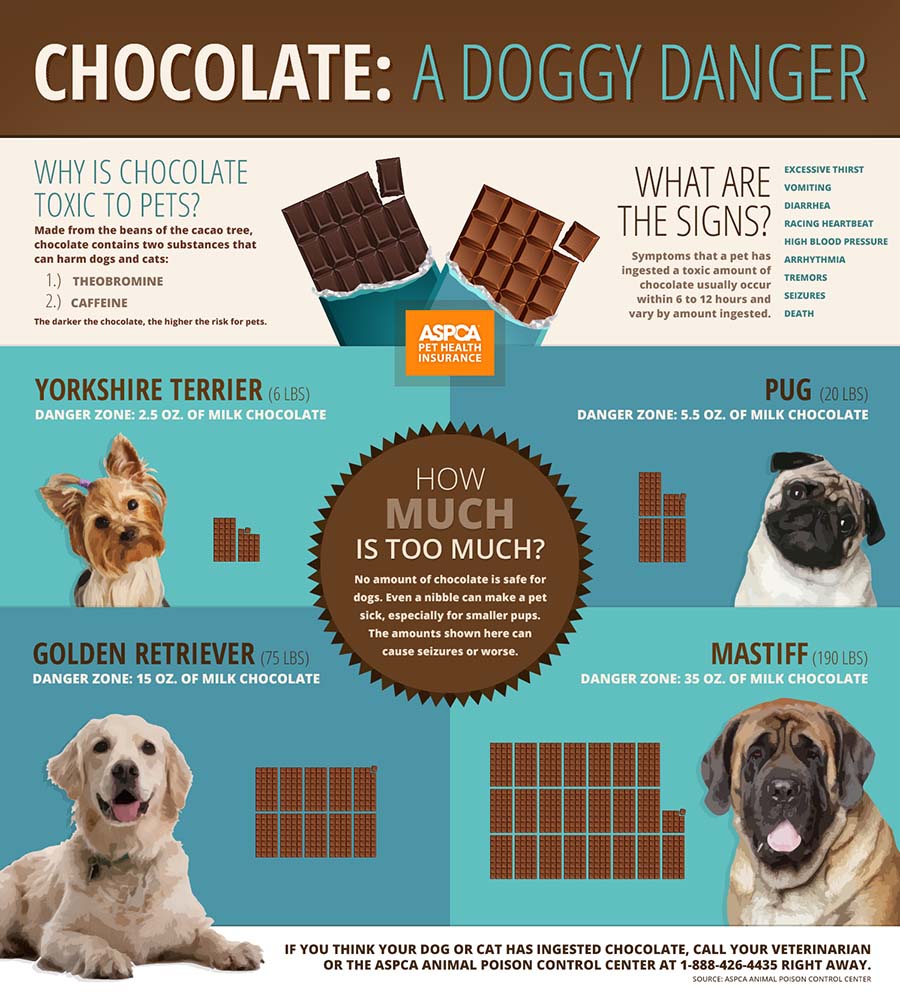 6 Side Effects of Chocolate for Dogs

Why is chocolate bad for dogs and what can you expect if your canine consumes it? Other than the above mentioned symptoms observed in several studies, such as heart attacks, muscle tremors, seizures and eventual death, some of the most common side effects of chocolate for dogs seen in veterinarian offices are these:

1. Even small amounts of chocolate can cause stomach upset.

It doesn’t take much more than a portion of an ounce of chocolate to upset a dog’s gastrointestinal system. Symptoms of stomach upset are bloating, vomiting, diarrhea, and loss of appetite.

2. Large amounts of chocolate may result in serious illnesses and disorders.

3. Severe hyperactivity can occur when a dog consumes chocolate.

A clear sign that theobromine poisoning is impacting your dog is if he exhibits extreme levels of hyperactivity after ingesting chocolate. Symptoms of this condition include:

Aside from causing seizures and muscle tremors, the theobromine in chocolate adversely affects critical systems in a dog’s body. Hypertension, hyperthermia, hypotension, and coma may occur. Additionally, respiratory failure and cardiac arrhythmias may result in death. Eating chocolate is especially dangerous for dogs with pre-existing heart disease.

5. Other medical complications may develop with chocolate poisoning.

Secondary health conditions may be generated as a result of chocolate poisoning. For example, the vomiting often associated with theobromine toxicity could potentially lead to aspiration pneumonia. Also, the short-term effects of caffeine and theobromine toxicity, such as anxiety and hyperactivity, can cause a dog extended discomfort.

6. Chocolate ingestion can lead to pancreatitis and diabetes.

Even if a larger breed dog can consume chocolate without suffering from poisoning, long term ingestion of chocolate can lead to a permanent, and devastating disease: pancreatitis. The pancreas is responsible for producing digestive enzymes, and exposure to the excess sugar overwhelms the organ.

Over time, sufficient damage is done that results in an inflammation of the pancreas which may lead to diabetes, fever, dehydration, depression, painful and distended abdomen, and lack of appetite.

What about the chocolate in dog desserts and treats? 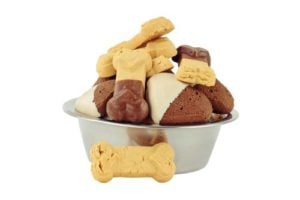 Some people think that the dark looking food often seen in dog cookies, cakes, and other sweet canine treats is chocolate. In fact, this ingredient is carob, a food made from the bean pods of the carob tree. It is an excellent, non-toxic substitute for chocolate in dog treats, and it contains many essential vitamins and minerals as well.

No treat or food for dogs will ever contain chocolate, caffeine or cocoa, because the industry and veterinarians are well aware of the dangerous side effects of chocolate for dogs, and it’s one of the first most suspicious foods when it comes to pet nutrition.

My dog ate chocolate. What do I do?

If your dog ate chocolate, there are a couple of steps that you should take immediately to resolve the situation. If you know that the dog has just now eaten some chocolate, you can take the first step yourself before calling your vet – induce vomiting in your dog.

Next, call up your veterinarian or pet poison line as soon as possible. Similarly, if your dog ate chocolate just now, the veterinarian may have you induce vomiting at home or may ask you to immediately bring the dog in to give activated charcoal to encourage your dog to throw up the toxic onion. The charcoal will reduce the absorption of the toxin theobromine into the gastrointestinal tract.

Lastly, you will need to keep a close eye on your dog for any signs of toxicity and makes notes for your vet. Depending on how much chocolate the dog has eaten, he may need to be hospitalized for some time to receive supplemental oxygen or even a blood transfusion. 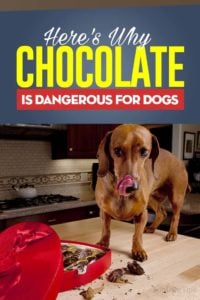 Why is chocolate bad for dogs? The theobromine in chocolate is what causes toxicity. It affects many dog’s body systems, and the short and long term damage that your dog may suffer is not worth the chance. If you want your dog to enjoy a safe, sweet treat, give him carob.

What if my dog ate chocolate? Try to induce vomiting in your dog and immediately call your vet or pet poison online.