Have you ever wished there was a button on your dog that would calm him down? Sometimes, our pets get so stressed out and anxious that it’s painful to see them this way. They don’t have that button, but there’s more than one way to calm down a dog, and some of them are backed by science. 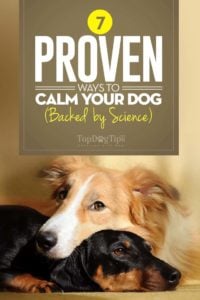 The meditative art of Zen allows a person to center themselves. It allows a practitioner to live in the moment and to achieve perfect piece. This form of meditation has been used by people to help them treat or cope with a host of mental, physical and emotional stresses.

Unfortunately for the man’s best friend, there is no way of comprehending the art of Zen. This makes it rather hard to calm down a dog, unless you know an effective method.

Dogs do live in the moment and require ways to deal with daily stresses in their own lives. Whether it be from an exhausting session of fetch, an afternoon at the dog park when they’re surrounded by other animals or spending a day alone waiting for their person to arrive, canines have their own stresses. Some of these factors are easily overlooked by us.

While their happy tail wags or slobbery kisses greet us at the door, it is good to keep in mind that dogs too need a way to calm down. Since they can’t communicate or understand what we say, we have to help calm down a dog in ways that they understand.

Here are seven effective and science-based methods to calm down a dog.

Playing music may be the easiest way to calm down a dog.

It has been observed that playing different kinds of music and sounds affects dogs in different ways. However, it was with classical music where the researchers saw that dogs were in a relaxed state much more than an active or agitated state. Here’s a short meta-review document (PDF) on everything related to dogs’ stress and music.

Whether it be the frequency, volume or tempo of the music, scientists could not precisely tell. To contrast, the researchers found that dogs would be pacing and vocalizing much more when heavy metal music was played.

Further research have shown that classical music indeed reduces the stress level in dogs. In this study, an animal shelter played “Four Seasons” and other classical tunes to kenneled canines and saw it as an effective technique to calm down the dogs every time.

Dogs often feel anxiety when they are left at home for prolonged periods of time. Most of us know this as the essential “going to work” time. This restlessness in dogs often leads to the development of unwanted destructive behavior, which results in anything from uncontrolled barking to destruction of our property.

So next time you leave for the day, play this on repeat to calm down a dog at home.

Another good use for this is on the opposite end of the spectrum – hyperactivity in dogs.

On a related subject, Samantha has also done a podcast with Amman Ahmed, creator of Relax My Dog YouTube channel that contains tons of music for calming down dogs. If classical music doesn’t work for your Fido, try some of these tunes instead.

A specific smell will reduce your canine’s stress levels. 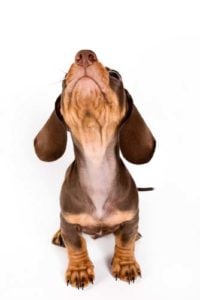 Several studies have shown that when dogs are exposed to lavender and chamomile they become less vocal, are more docile, more relaxed and are less active, as opposed to their behavior when exposed to peppermint or rosemary.

In a more binary example of scent sensitivity, dogs were observed in a controlled setting without any odor stimulants and then again when exposed to lavender. The results were polarizing as the dogs showed significantly less activity and vocalization when exposed to the scent.

To put it shortly, lavender (and to a certain extent chamomile) have proven to be effective methods to calm down a dog. Some of the essential oils for dogs may have similar effects on pets and reduce their levels of cortisol and, as a result, anxiety.

Finally, the same has been observed in dog-appeasing pheromones, further confirming that specific smells can indeed calm down a dog quickly and very effectively.

Pet your dog to calm him down, but don’t hug him. 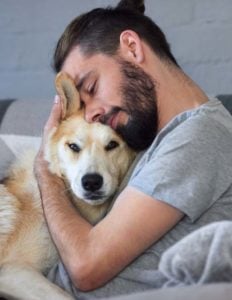 It is said that the worst thing you can do to a newborn baby is to deprive it of human contact. The same can be said about dogs. When dogs are viewed in a “natural setting” or in feral communities, it is observed that they live in a pack-like structure, and in the den they often sleep close together.

Their pack-lick behavior in the nature is likely related to their close relatives – wolves. And even though over 10,000 years of domestication, behavior of dogs has changed significantly to that of wolves, there are traits these animals still share in the wild.

As for the pack-like structure, it is unsurprising as a tight knit community, much like sleeping near one another, provides a measure of both physical and emotional security.

A study showed that when dogs were groomed (petted) on highly innervated areas of the body, there were noticeable physiological changes to the subject.

It was observed that with as little as 8 minutes of stroking, a dog’s overall heart rate can be decreased. Since an elevated heart rate is usually a common indicator of stress, this simple act of petting is a convenient and effective way to calm down a dog.

As with most things in this world, there can be too much of a good thing, and physical contact is no different. It has been observed that excessive hugging can actually cause a dog’s stress levels to increase. According to experts, hugging is in effect restricting a dog’s ability to express movement and makes them feel trapped, which they dislike.

Hugging actually increases their heart and breathing rate, and elevates a dog’s stress hormones. It is only natural for a human to hug a dog to show him affection, but it would be wise to keep in mind that the dog does not necessarily see it in the same light.

Increase in cortisol is bad for dogs, so exercise your pet to reduce it. 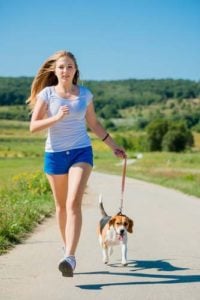 We know that a good workout can help our minds and bodies unwind and release some pent up energy, particularly with high intensity workouts or heavy lifting.

It seems that a good set of exercise can have similar effects on dogs. With as little as a 25-minute workoutand human contact session, a dog’s stress levels can be significantly reduced.

A research team has found that mild exercise and physical contact with the dog’s person can have a calming effect on canines as observed by the reduction of the cortisol levels measured in canines’ saliva.

Cortisol is often referred to as the stress hormone and is related to a host of adverse physiological and psychological effects on the canine body.

For dogs, not only is cortisol the primary suspect for increasing their level of stress, but it also decreases sleep, lengthens healing times and in prolonged elevated levels, can lead to the breakdown of muscle protein in a canine body. Cortisol is serious business.

Fortunately, putting a dog through exercise routine that doesn’t require a vast amount of resources is a convenient and highly effective way to manage it, and calm down a dog.

Take your paws off of her (just for an hour). 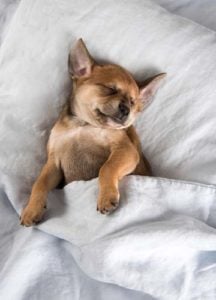 This may seem like a silly idea that should be reserved for misbehaving toddlers; however, there is evidence that suggests that planned or scheduled “quiet-play” and time out sessions may very well calm down a dog.

A study done on therapy dogs in a stressful hospital environment indicated that when dogs were given one to two hours of time to themselves, away from the ever-changing and bustling atmosphere of a working hospital, their stress levels decreased.

Once again, stress levels were measured using canines’ salivary cortisol levels from three different time intervals throughout the day. The most effective measure of stress.

Elevated levels of cortisol in a dog can lead to dire consequences as it has negative effects ranging from heart rate to sleep to immune response. Suffice it to say, the presence of high cortisol levels is indicative of a highly stressed animal.

Giving your dog a mere hour or so to themselves without you bothering them, so that a dog can calm down and gather herself, would do your pet a world of good. 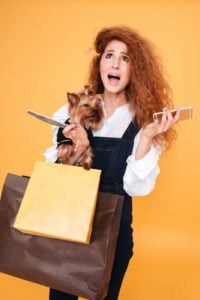 Enter Quality of Life factor (QoL) – it has different meanings for different people, and rightly so. Everyone has their own definition of it, and there are various ways to measure your QoL. However, a correlation has been observed in the QoL of dogs and their owners.

Using the Lexington Attachment to Pets Scale (LAPS, or “Attachment Scale”) test, researchers were able to deduce that dogs whose owners enjoyed a higher and more fulfilled quality of life also tend to have a higher quality of life themselves.

This study observed that seemingly benign factors like marital status of the owner and relationship lengths in the owner’s life played large roles in helping to calm down a dog.

Researchers concluded that this must be due to the owners’ ability to form emotional bonds with others and their dog. Apparently, these emotional bonds lead to a decrease in the amount of stress that the dog experiences.

Furthermore, going on the assumptions, strong and stable relationships on the owners’ end may also mean less conflict in the household.

Finally, since research has shown that dogs have a tendency to feed off the energy and emotions of their owners and surroundings, the emotional stability of the owner would obviously be reflected in the dog as well. By decreasing the amount of stress in their own lives, humans can in fact bring calm and relaxation to their dogs lives.

The very last resort, but it works. 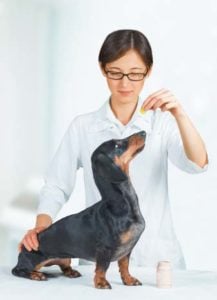 Using drugs to calm down a dog, especially one with mental or emotional conditions, is often the least recommended option. Just like in humans, a pill should not be your first or second choice of dealing with problems, nor is it a good option for pets.

Pharmaceuticals often bring along with them undesirable side effects and their own brand of stress. However, since it is still a viable option, it must still be explored in this article.

There are several anxiety medications for dogs that have been shown to work well. The tricyclic antidepressant, clomipramine, has been shown in several studies to decrease separation anxiety induced stress in dogs left alone from 22 to 90 minutes at a time.

In particular, studies observed that the administration of clomipramine had a significant reduction in pacing, scratching and vocalization in dogs, as well as an increase in what is deemed as passive behavior in canines.

However, as with most other medications, extreme caution should be taken when giving it to dogs. Clomipramine (brand name “Anafranil”) does have adverse effects for dogs which range anywhere from vomiting and diarrhea to weight loss and palpitations.

While side effects may vary from individual to individual, it is best to keep a close eye on your dog if you choose to medicate him in any way. Always consult a vet beforehand.

Another option dog owners can try to calm down a dog before using pet anxiety medication is to try dog anxiety vests. There hasn’t been any research on anxiety vests to date; however, anecdotal evidence and pet owners’ reviews show these to be effective.