Clouding of the lens of the dog’s eye are called cataracts. It can impair sight and, in extreme cases, cause blindness. The majority of cases only have minor impact on the vision, and with corrective treatment cataracts in dogs can be either entirely reversed to perfect eyesight or very near to it. 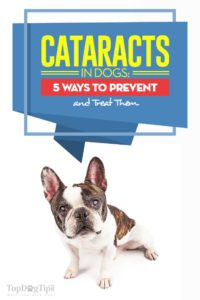 Cataracts in dogs can be caused by a number of reasons, including aging, diabetes and injury to the eye. There are few physical symptoms of cataracts other than the discoloration of the lens itself. Sometimes the eye can weep, or be unusually sensitive to light.

Each of these symptoms can be easy to miss, so it’s best to check sporadically. If you suspect that your dog is suffering from cataracts, take him to the vet immediately.

Likewise, if you suspect that your dog has injured his eye, this can turn into full blown cataracts if left untreated. It’s best to seek immediate treatment for any eye issues that you suspect with your pet.

Cataracts in Dogs
5 ways to prevent and treat them

Cataracts are a clouding of the lens of the eye. It’s pretty self-explanatory as to what the lens does – just like the lens of your glasses, or your camera – it helps you to see clearly.

The clouding caused doesn’t always cause blindness, in fact, many dogs suffer from minute clouding which hardly affects their vision at all. However, in certain cases – the clouding progresses over time and does result in blindness or near blindness without treatment.

Cataracts can be worrying for pet owners, and in some cases have appeared overnight. But, in many cases, they are entirely treatable and will leave your dog with perfect or near perfect vision. They rarely cause any pain, except for in cases where inflammation is also present, but your dog may become distressed at the sudden change in vision.

Symptoms of Cataracts in Dogs

The most common sign of cataracts is, of course, a distinct change in the appearance of the eye. With a normal healthy eye displaying a clear pupil, ordinarily amber in color. However, when the clouding of the lens begins, this can initially appear as a film over the eye or cause the pupil to appear as though it has changed color to blue, gray or white.

Another sign of cataracts, other than the aesthetic of the eye itself, is if your dog is clumsier than normal. For example, if you throw him a treat, does he catch it? Does he have to wander around the room for a little while looking for it?

It’s important to note that these symptoms don’t always point to cataracts. Damage to the eye in any capacity can often turn into cataracts without treatment – so upon seeing any signs of injury or disease to the eye – consult your veterinarian.

How dogs with cataracts see: 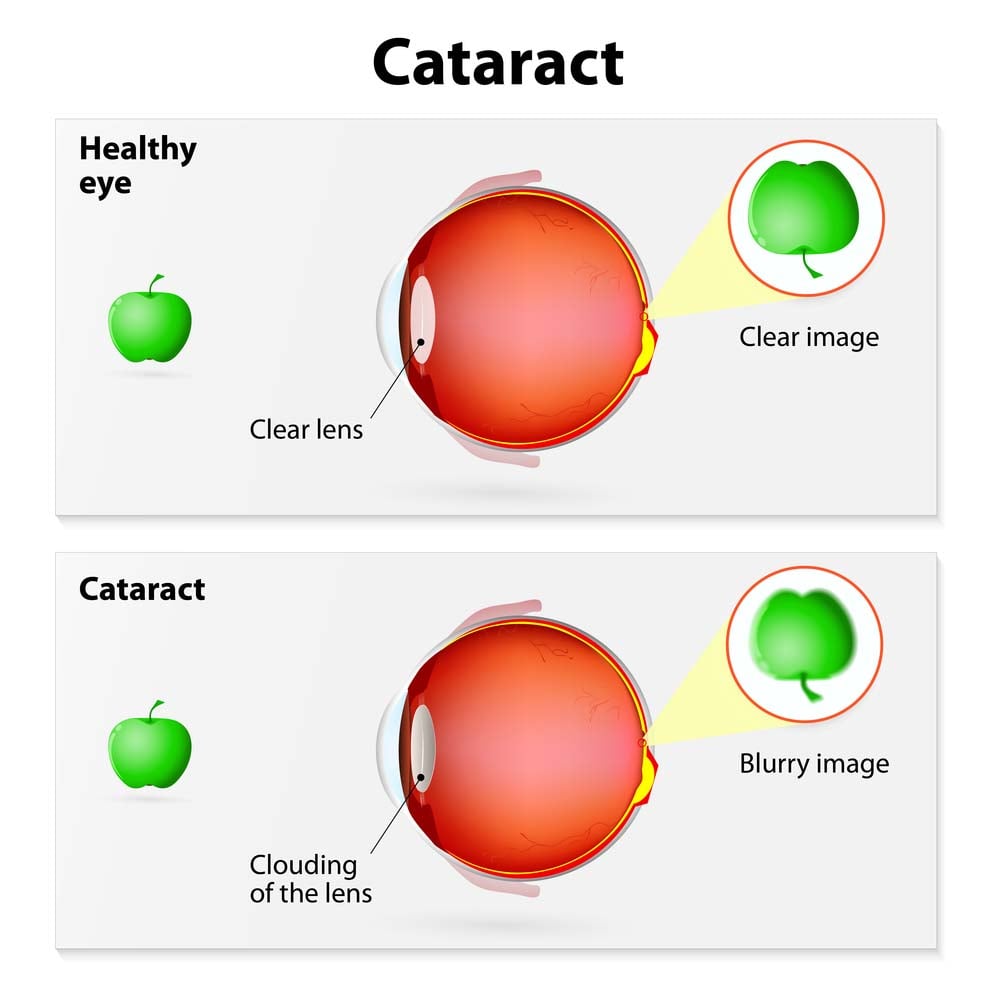 While there are different stages of growth, each cataract is unique, and many factors play a role in the speed of development. In some cases, your dog can skip over stages, and in others the condition may halt, or progress incredibly slowly.

Minimal impact on vision, affecting only around 10-15{700e02215a054a51a93d2126ad34d7b00b8926a8fffa4b5ac06a4d3d9bc00d5e} of the lens. Many diagnoses at this level will not progress further than this coverage, with the inheritance of incipient cataracts, your dog can easily live a normal healthy life with perhaps no treatment necessary at all.

A significant level of vision impairment, with complete or near complete coverage of the lens capsule. It’s not always ideal to operate on canines at this severe level of progression, but it must be judged on a case by case basis – and can sometimes be reversed back to an immature stage with medication.

This type of cataract causes wrinkling of the lens, and the contents to become solidified and shrunken. Some cause the eye to appear completely cloudy, but in others, there can be clear spots which do allow for some vision.

What Causes Cataracts in Dogs?

A common side effect of aging is an impaired vision, and many older canines will develop some level of cataracts, depending on the severity of vision loss – some owners choose to avoid surgery especially in the case of canines who suffer from underlying health conditions that may be detrimentally affected by anesthesia.

The average dog’s immune system is incredibly tough and can fight off potential illness’ and disease’ with no help from us. But, one factor that we see worsening the dog’s immune defense is frequent over exposure to toxins.

Many owners, seeing articles and adverts about the importance of vaccinating their dogs, can end up unwittingly over-vaccinating their pets by trying to do the best for them. This can hugely increase their pet’s risk of developing cataracts, and for that reason, it’s advised to only vaccinate for what you need to. Always use your best judgment when deciding on which vaccinations your dog must be exposed to.

There have been countless cases of puppies developing cataracts due to nutritional deficits, often caused by pups given milk replacer that doesn’t provide them with everything that they need. Or in some cases, when they don’t receive enough milk from their mothers. Luckily, in most cases, this resolves itself later in life.

5. Trauma to the Eye

If your dog just loves to run through tall vegetation, he can easily injure his eye, and no matter the severity of the injury – this can turn into a full blown cataract. The way that this can happen is through the lens rupturing, which will cause leakage from the lens into the surrounding areas.

If you suspect that your dog has hurt his eye, it’s important to take him to the vets asap. It’s often impossible to see the full extent of the damage without an actual eye examination. Many injuries that could have turned into cataracts have halted before being able to get that far, and this is all thanks to speedy investigation and treatment! 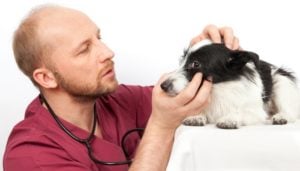 Nuclear sclerosis can show the same aesthetic symptoms of cataracts with a cloudy grayish blue appearance of the pupil.

Many owners self-misdiagnose the condition as cataracts, but in fact, this is a typical condition attributed to aging and doesn’t cause any discomfort to your pet. No treatment is necessary for this condition, and also doesn’t indicate that your dog will later suffer from cataracts as the two conditions are entirely unrelated.

Who Is Most At Risk?

Cataracts in dogs are often inherited, with pure breeds being more at risk of developing them than mixed breeds. Certain breeds are also more at risk than others, with the highest instances of the condition showing up within:

How to Prevent and Treat Cataracts in Dogs

Dealing with symptoms of cataracts in dogs is always harder and more expensive than preventing the condition in the first place. Here are a few things you can do.

I’ve always said that veterinarians have the hardest job. They have to find injuries, illness’ and other potential problems on our little fluffy friends, all without the help of their patients telling them where it hurts!

But, it’s not just vets that have this problem. Pet parents far and wide have to watch out for minor injuries, changes in appetite, and energy levels too. It’s important to be astute, as minor injuries can lead to full blown emergencies.

Cataracts alone are often caused by an eye injury that went unnoticed, and therefore untreated. A weeping eye is one of the most visible signs to look out for, but if you spot a change in your dog’s blinking pattern, or see that he flinches when you go to stroke near his eye – take him to your vet immediately.

Checkups, routine exams, health checks, whatever you choose to call it – they are a lifesaver for many. But for many others, myself included I hasten to add – our busy lives can all too often seem far more important than going to the doctors of the vets when there isn’t even anything wrong.

But, after my dog was diagnosed with a medical condition that would have had a far better survival rate if we’d caught it sooner – I’ll never make that mistake again, and I implore you to take the routine exams seriously.

Reversing an advanced cataract is not only difficult, but it can be expensive and painful for your pooch. Spotting problems before they even become problems is the kindest thing you can do for your animal.

There are a number of supplements that can help to fight off, and dog eye care products, or minimize the coverage caused by cataracts. These include:

The most common form of treatment for progressive cataracts is surgery to remove them. A cataract is not a foreign object within the eye; rather it is the clouded lens. Therefore the surgical procedure to eliminate this is, in fact, the removal and replacement of the lens

But before you worry that this is a dangerous procedure, this is one of the most commonly performed routine surgeries. Your dog’s lens will be replaced by an artificial lens which can restore perfect vision in most cases.

In some cases, an artificial lens is not a viable option – and instead, the dog is left without a lens (which he’s quite capable of functioning without) and restores almost perfect vision. The only real difference is that it will leave him a little bit long sighted.

The two weeks following surgery are the most critical time for healing, and in this period your dog will need to wear a cone collar to prevent irritating or scratching at the eye. You’ll also need to give your dog prescription eye drops to help with the healing and prevent infection. 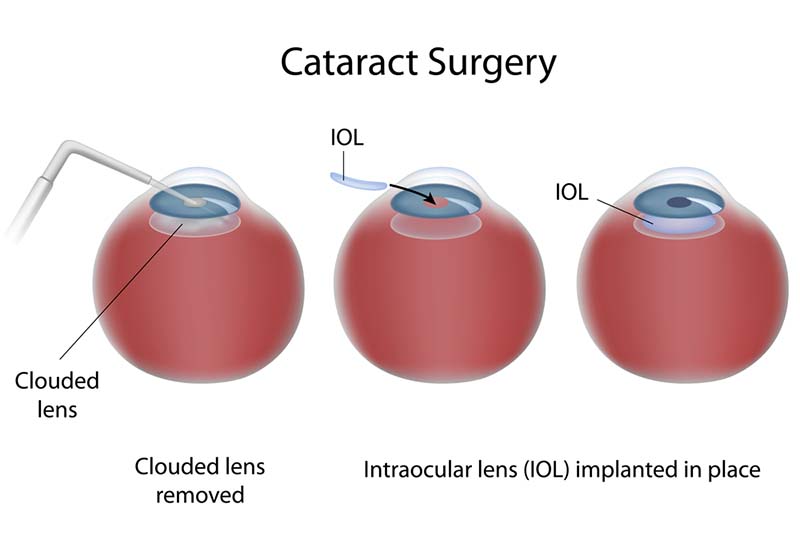 Eye drops are one of the most common non-surgical treatments, with substances such as lanosterol showing to be especially good at dissolving the clumped proteins which form cataract clouding.

For many owners, cataracts in dogs can seem like a pre-diagnosis to inevitable blindness. But, in the majority of cases, with the right treatment, it can produce phenomenal results with perfect or near perfect eyesight restored.

With most symptoms being purely aesthetic, it’s important to keep your eyes peeled, and watch for any changes in your dog’s eyes. And at the very least – take him for a yearly eye exam.