Dogs tend to explore the world around them with their senses, primarily with the sense of smell and, subsequently, taste. That usually leads to many inedible objects winding up in the dog’s stomachs, some of which can be dangerous and even deadly, and also result in a costly surgery for the owner.

While many dogs have very strong jaw muscles to chew through almost anything, they have a gastrointestinal tract very similar to humans and many of those inedible objects can cause a real harm to your pet’s throat, stomach and other organs. Rocks, balls and other things that find their way to your dog’s stomach can cause tears, obstructions and infections and will often require surgical removal. If your Fido is one of those dogs who will put anything in their mouths, here is what you can do to prevent or stop this behavior.

Use a Muzzle (temporarily) 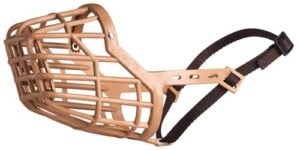 When this becomes a serious problem, start with a muzzle. I know that using a muzzle for dogs sounds harsh for some and you may be reluctant to try it, but that is not a terrible solution if you can’t train your pooch not to eat everything in his path, and something that might eventually safe his life. Moreover, it should serve only as a temporary solution while you’re training your dog to fix this specific behavior.

Another thing to deal with is other people’s perception. You might worry that they will think that your dog is aggressive if he wears a muzzle, but don’t let that concern over other people’s opinions stop you from helping your canine avoid harmful objects.

If you are worried that a muzzle will make your dog uncomfortable, that shouldn’t be a problem as long as you find a muzzle that fits well. Choose a basket muzzle over fabric muzzles. Fabric muzzles aren’t the best because they stop your pet from panting or drinking, and that is not a good choice for dogs on daily walks. Fabric muzzles are best used for aggressive canines when they have to visit a vet.

Basket muzzles can help with avoiding solid items, like rocks and balls. However, with gooey inedible stuff they are not as effective. Also, keep in mind that dogs can learn how to get to solid objects through the muzzle as well and that the best solution for this problem is training.

Train Your Dog to Stop Eating Everything 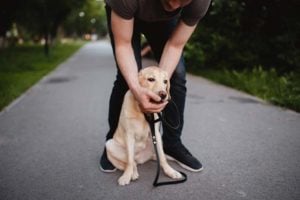 This training will take time and patience, but with a bit of effort you can teach your dog not to eat inedible things, at least most of the time. Start with teaching your pet some of the most basic commands. Training a dog things like “Come” or “Drop it” is a great place to start, and these are some of the easiest even for inexperience owners-trainers.

To teach your dog the “Come” command, use some tasty and tempting food as a “bait”. Put the food, like a roast beef or chicken, on a raised surface so your dog can’t get to it but can smell it. Then, take him close to the food and move away from him. Tell him “Come” and offer him a treat when he comes to you. Repeat this process many times. This can be very useful when you notice that your dog is starting to veer away from you on walks, which usually leads to him finding something “tasty” to put in his mouth.

Another useful command is “Drop it” or “Leave it”, which you can use when your dog already has something inedible in his mouth. For this command, have a treat in your hand and a treat close so you can reach it. Make a fist with the hand in which you have the treat and put it close to your dog’s nose. Your dog will try to get to the treat, but he will give up at some point. When he does, say the command and give him another treat. Don’t give him the same treat that was in your hand, he needs to understand that this treat is off limits. After a few sessions your dog will not even notice the treat in your hand. Increase the difficulty gradually, first by opening the fist, then by placing the treat on the floor.

After you teach your dog these two basic commands in a controlled environment of your home, it is time to try it out outdoors. Place some treats or tasty food in strategic places so you can be sure that your dog will find them. Use a long line to prevent your dog from getting to the food, but don’t “reel him in” until you are certain that he won’t come to you when you issue the command. If he comes to you when you tell him to, reward him with a treat.

Some dogs will eat inedible stuff out of boredom or because they lack mental stimulation, especially during a walk. Try to make walks fun for your dog. You can encourage sniffing, but only after you have taught your dog the “Leave it” command. You can keep up the pace and change directions often. Try to teach your dog to walk by your side and reward him often with treats when he does.

Although you can’t be sure that your dog won’t eat something he shouldn’t when he is left unsupervised, you can try to prevent this by keeping him amused when he is alone at home. The best way to do this is with plenty of interactive dog toys, puzzles and treat dispensers.

You can also exercise your dog before you leave home. If he is tired, he is less likely to engage in any type of unwanted behavior, including going through trash and exploring with his mouth. 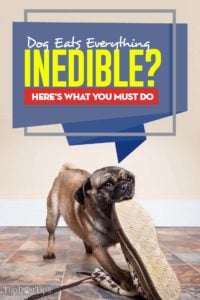 Keep in mind that some dogs have a condition called picawhich causes them to crave and eat inedible things, like rocks or poop. Pica can be a result of some underlying health issue, like malnutrition, diabetes, parasites, etc. Take your dog to the vet for diagnosis.

If your dog isn’t suffering from pica and you are still unable to stop him from eating inedible things, even after training him the most basic commands, you should consider taking your pooch to a qualified canine behaviorist (not a dog trainer; there’s a difference).