Even though some dogs are more playful (and friendlier) than others due to breed factors, it is in most dogs’ nature to enjoy playing with their owners and other dogs. If your Fido is usually very playful, it’s only natural for you to be concerned if his behavior changes and he is not as playful anymore. There are many reasons that can lead to this, some more serious than others, but it can also be a sign that your pooch is getting older.

It’s possible that your pooch isn’t playing with you anymore simply because he has no interest due to older age. Some dogs tend to be very playful as puppies, but that doesn’t mean that they will stay as playful when they become adults and especially seniors. This is particularly true if you have a breed that is not that active by nature, like English Bulldogs or English Mastiffs. Other very active breeds and more playful dogs like Corgies, Labradors or Boxers will usually remain as playful when they grow up. 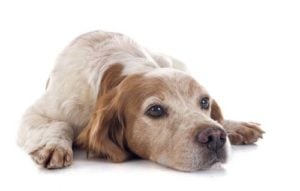 In order to have a playful adult dog, you must socialize him as a puppy and provide a lot of play opportunities. Some dogs will be playful without the extra push from the owner, but others can be taught to be playful. Create a stimulating environment for your dog, with food puzzles and toys, and let him interact with humans and other dogs a lot.

However, as dogs grow older, their playfulness will naturally decline. If you have a senior dog, you don’t have to worry about him not being playful (i.e. it’s not a senior dog health problem), unless that is followed by some other symptoms which can signal an issue with his health. Some senior dogs will have a desire to play, but they might not be able to do it physically. Before giving up, try finding games that don’t require a lot of movement and physical involvement for your Fido. Here are some ideas. 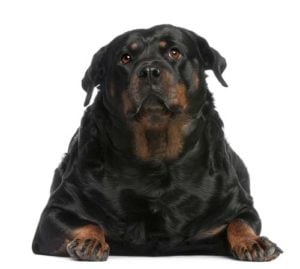 Old or young dog, changes in your pet’s behavior, including a decreased desire to play, may be a symptom of a health issue. According to veterinarians, if your dog doesn’t seem interested to play, he might have a dental health problem, for example. Infected gums and teeth can affect his ability to chew toys or carry them in his mouth. They’re difficult for the owner to spot.

Another issue may be obesity. If your dog is overweight, his playfulness levels can drop, either because he has less energy than healthy dogs, or due to painful joints, respiratory problems and other health issues that are related to excessive weight.

Arthritis and decrease of brain functions (cognitive dysfunction) are more common in senior dogs, but they can also affect adult dogs sometimes. Keep in mind that many other health issues can make your dog less playful, simply because he might be in pain. If you notice any other changes in behavior, take your dog to the vet for a check-up. 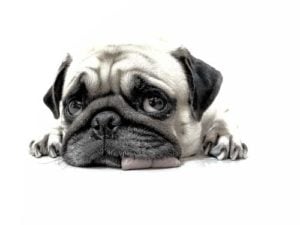 Depression in dogs is still being researched, but there are some sings pointing to the fact that dogs can in fact get depressed and develop apathy, particularly due to lack of mental stimulation. According to Dr. Raymond Van Lienden, it is pretty obvious that dogs have emotions and they can be in a bad mood from time to time.

If you notice symptoms like loss of appetite, changes in sleeping habits, and, of course, decreased playfulness and interest in other things that usually excite your dog, depression – or anything related to it – can be the cause. However, these symptoms can also signal other, physical health problems. Don’t jump to any conclusions before you take your dog to the vet. You can learn more about depression causes, symptoms and treatment options on this website.

Is It Your Fault? 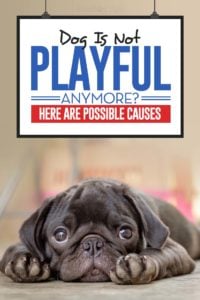 If your dog doesn’t seem responsive to the stimulation to play with you, the reason can also lie in your wrong approach. According to some recent studies, dogs react differently to different “play signals”.