Dogs may not be able to understand the meaning behind Thanksgiving, but they can certainly enjoy it! While it may be tempting for dog owners to indulge their four-legged pals and give them some turkey leftovers, we’d strongly advice you against doing this. Some of the traditional foods that we eat are safe for your pet, but these best Thanksgiving dinner for dogs ideas don’t include the toxic foods that can be found on the table for humans. 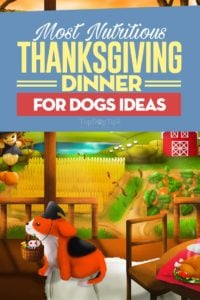 You may be wondering why, after all, isn’t turkey meat good for dogs?

Yes, yes, it is. However, virtually everything else that’s part of the Thanksgiving dinner table is extremely unhealthy for your pup – the succulent, delicious turkey skin, the rich, the extra fat ham bones, the spicy gravy, the wine sauce, butter, cream, salt, peppers, even the chocolate desserts which are often a part of most Thanksgiving dinner tables.

All of those things are awful, and even potentially deadly for your dog. A simple turkey bone splinter can block your pet’s intestinal track and have terminal results for your pet long before you are able to get it to a vet. Salmonella is often an issue, given how often we leave the food on the table for too long and give it to the dog after that.

These aren’t the only safety concerns that you need to worry about when feeding your dog Thanksgiving leftovers. Thanksgiving dinner for dogs should be specially made in order to be safe, healthy and meet their unique nutritional needs. 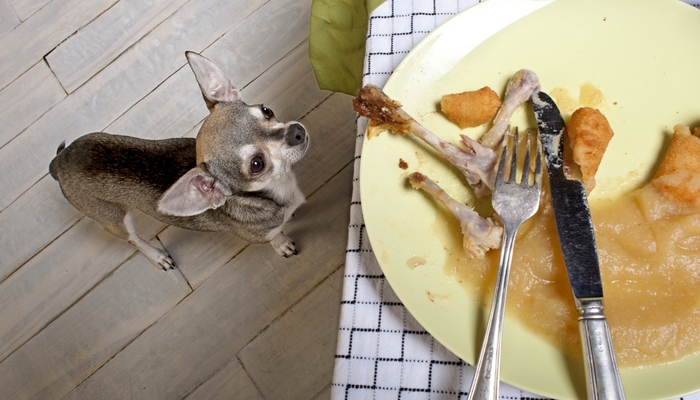 Is Thanksgiving Dinner for Dogs Safe?

A quick switch from a kibble diet to a huge dish of human food can wreak a ton of havoc in your pet’s digestive system. Moreover, not all Thanksgiving dinner for dogs is a safe and healthy option for them; and there are specific Thanksgiving foods that are straight up dangerous to dogs.

The best way to avoid any problems is to stick to homemade Thanksgiving dog food over human foods. To not spend half of the next day at the vet, either don’t give your pet leftovers or make sure that your pet is used to homemade, wet dog food beforehand.

If you feel that you absolutely have to give your dog some leftovers from the Thanksgivings table, make sure that it is just a piece of lean turkey with no skin and no bones whatsoever. If you think we are being overly dramatic, here’s what Casandria Smith, chief veterinarian with Los Angeles Animal Services, says:

“Veterinarians experience an increased number of office calls due to digestive problems after the holidays because humans invite their animals to celebrate with high fat meals.”

One instance is often enough, especially for young dogs. And, once this behavior is established, it takes a lot of time and effort to un-teach it. Trust me, chances are that you will quickly grow to regret ever giving your pup leftovers.

All those words of safety are well and good, but still – it’s Thanksgiving! Why should we be the only ones that enjoy a nice, delicious meal? After all, most dog owners will agree that their four-legged best friend is quite near the top of their “Thank you” list, right? 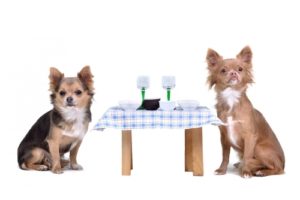 Plus, turkey is a great meat for dog food. The truth is, Thanksgiving dinner for dogs can be done properly. Below, I’ll share some safe and healthy dog-friendly recipes.

It’s okay if you are not used to cooking homemade dog food for your furry pal. He or she would certainly be grateful if you would do it every once in a while on such special occasions.

Of course, when it comes to homemade dog food, there are a lot of warnings that must be raised as well. A lot of dog owners that feed their pets with homemade dog food fail to make it healthy and nutrient-rich or vitamin-rich enough. These problems only become dangerous when we are talking about long-term feeding with homemade food.

If we are instead talking about a one-time deal, then as long as you make sure to include only acceptable products in your Thanksgiving dinner for dogs, everything should be fine. So, as I mentioned above, some of the no-no ingredients you need to avoid include: 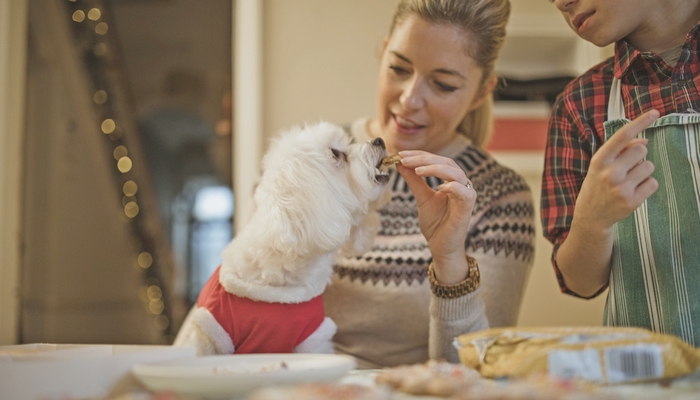 Preheat the oven at 180°C or 350°F. Put a lightly oiled roasting pan in it. Cook 30 to 45 minutes if the meat is boneless and 45 to 60 minutes for boned meat, or an hour and a half for a whole turkey. For a doggie meal we’d advice on a boneless thigh or breast meat. After the meat is cooked, let it cool off.

If the meat was boned, remove all the bones and dice the meat. Cook the sweet potatoes together with the meat, but only for 25 to 30 minutes or until they are tender. After that you can let them cool off, peel and chop them.

Cook the oatmeal separately, according to its instructions. Mix everything together and add the cranberry sauce and the gravy or oil, if you are using any. Serve and watch your dog’s happiness with utmost delight!

Put the apples and the cinnamon in a sauce pan together with 1 cup of water. Get the water to boil and then cover the pan. Let it simmer for about 20 minutes until the apples are completely soft. After that remove the pan from the heat and let the apples cool off.

Fill up the cupcake pan with the creamed apples. Bake the contents of the cupcake pan for 45 to 45 minutes on 350°F or 180°C. Once the cupcakes are baked, let them cool off and give them to your dog for a swift and ravenous devouring!

Put the broth to boil in a deep saucepan or a skillet. After it boils, salt it lightly and let it simmer. Combine the ground meat, the egg, the carrots, the cheese, the parsley and the garlic paste into a bowl, and form the mixture into 1-inch meatballs.

Drop the meatballs into the simmering broth and let them simmer with it for about 5 minutes or until lightly cooked. Cook and stir the pasta for about 6 or 7 minutes. Let everything cool off and serve the meatballs on top of the pasta. Watch your dog enjoy this Thanksgiving dinner for dogs!

Combine the ground beef and the cottage cheese in a large mixing bowl. Once you’ve mixed them, add the eggs, the milk powder, and the wheat germ and mix again. After that add the crumbled bread, the oatmeal, and the brown rice. Mix again.

Divide the mixture into five equal small aluminum loaf pans. Place the portions on a cookie sheet and bake them at 350°F or 180°C for about an hour. Let the loafs cool off for about an hour and serve one of them to your happy pooch, while putting the others in the freezer.

Mix the turkey, the cheese, and the parsley. Beat the egg and pour it over the mixture. Add the flour, the yeast, and the oil. Stir until all the ingredients are perfectly mixed.

Preheat the oven to 350°F or 180°C. Mix all the ingredients together in a large bowl. Add some water so that they can form a dough. Knead the dough with your hands and place it on a sheet of cookie paper. Roll the dough until it’s no more than a quarter of an inch thick (about 6 mm).

Preheat the oven to 350°F or 180°C. Add all the ingredients together in a bowl and mix them. Scoop out the mixture onto a baking sheet and shape as many small cookie shapes as you want. Shape them into pumpkins, bones or any other shape you prefer.

Preheat the oven to 350°F or 180°C. Put the flour, the wheat germ, the yeast, and the salt in a medium sized bowl and set them aside. Put the oil in a large bowl. Add stock and flour mixture in three separate batches, and mix well. The batches must begin and end with stock.

Roll out dough on a lightly floured surface and roll it to about a quarter of an inch of thickness (about 6mm). Shape the cookies out of the dough in whatever shape you like – bones, pumpkins, turkey legs, or plain ol’ circles and stars. Bake the biscuits in the preheated oven for about 10 minutes.

Leave the biscuits in the now turned off oven for about an hour and a half to dry off completely. Let them cool off for as long as necessary. Serve the biscuits to the luckiest dog in the world!